The blue and white "囍" covered pot in the Qing Dynasty began in the middle of the Qing Dynasty. Commonly known as "happy word jar", there is also the saying of "double happiness" jar. The utensil type is composed of a jar and a cover. The ancients used the double happiness jar mostly to hold candy and peanuts at the time of marriage. Later, it was also used in kimchi by large families.

According to relevant records, the word Shuangxi was created by Wang Anshi in the Northern Song Dynasty. It is said that when he went to Beijing to take the exam, he met a horse member on the way and asked for a son-in-law. Anyone who can tell the next line of "walking the lantern, walking the horse, turning off the light and stopping the horse" can be recruited as a son-in-law. Wang Anshi wrote down the title and hurried to the examination. He successfully entered the palace examination all the way. Unexpectedly, the emperor personally asked for a couplet for the title of "Flying Tiger flag, flying tiger flag and rolling tiger hiding". Wang Anshi was overjoyed and hurried out of high school to "walk the Lantern, walk the horse, turn off the light and stop". Wang Anshi smiled at his wedding night when he was inscribed on the golden list. With a stroke of his pen, the conjoined double happiness words became entangled. After that, it became a folk custom to post double happiness words for wedding events. 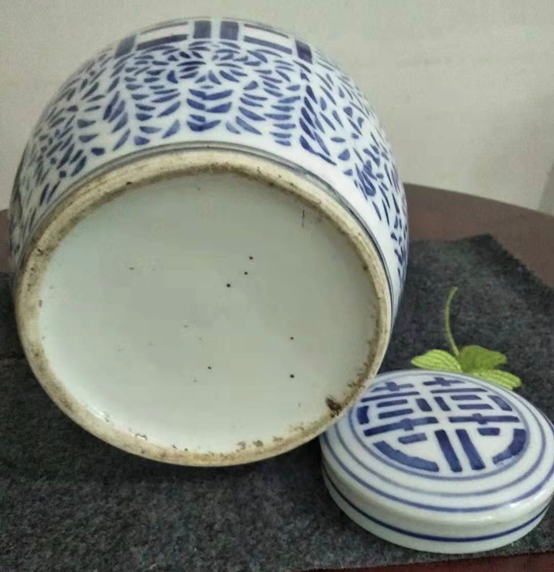 The blue and white happy word jar in the Qing Dynasty was indeed a very typical utensil at that time. Although it belongs to folk kilns, it is not easy to preserve it completely. There are three reasons: first, the ancients only fired custom wedding cover cans during the marriage period. Because they are meaningful utensils, they will not have as many as ordinary dishes and porcelain plates. Second, the happy word cans are generally in pairs, so they can not be regarded as cherished by people like the official kiln, and it is difficult to avoid being broken. 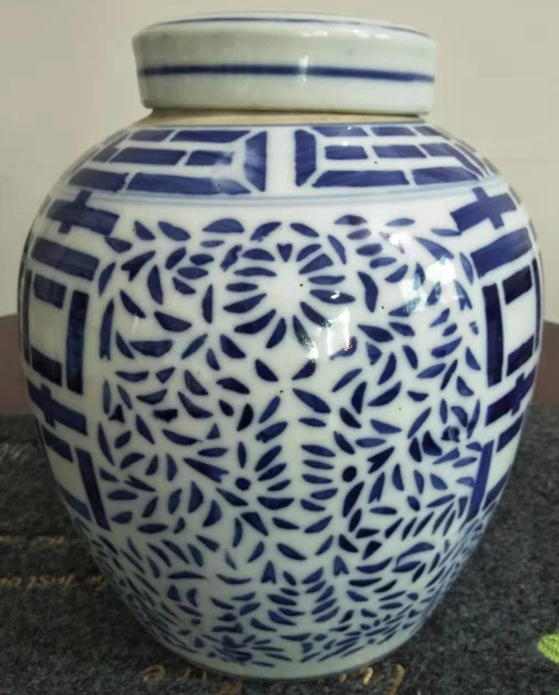 In recent years, the scale of the auction market of middle and low-end porcelain has been increasing, but the growth rate is in a downward trend, the price center is moving down, the average price is also falling, and it still takes time for the market to recover. 2013 China market is not lack of high-priced items, clinch a deal but it did not improve the overall China market downturn, according to art market monitoring center (AMMA) incomplete statistics, in 2013 to clinch a deal in 5 million yuan of the following items number accounts for 99.29% of China total volume, turnover accounted for 62.84%, compared with 2012 rose 44.54% and 2.42%, respectively, increased market share of 6.58%, 62.84%. The average price is 1,557,700 yuan, the lowest in nearly a decade. It can be seen more intuitively from the middle and low-end (within 5 million yuan) porcelain market that the overall porcelain market was very popular from 2012 to 2013.

This happy word jar with cover in the Qing Dynasty: 24cm high, 10cm mouth longitude and 14.5cm bottom longitude. The jar shape is full and exquisite, delicate and transparent, and the inner wall has a smooth white glaze. It is a first-class gift for the marriage of rich and noble people in the Qing Dynasty. The opening of the jar is convergent and exposed, the inside and outside of the jar body and bottom are full of glaze, the inside and outside of the foot end are inclined and sharp, the whole jar glaze color is moist, the blue and white flowers are calm, the white ground is blue, and the shoulder is decorated with a small roll grass pattern and a ruyi head cloud shoulder pattern, The main patterns are two groups of symmetrical double happiness patterns and tangled branch hook lotus patterns. The lower part of the tank is a simple pen lotus petal pattern. The happy word is medium and symmetrical. It is filled with double hooks, which can be broken into folk kilns in the middle of the Qing Dynasty. According to textual research, this kind of blue and white double happiness jar with tangled branches and lotus patterns first appeared in the Jiaqing period of the Qing Dynasty. It has been produced continuously until the early Republic of China. Up to now, it can still be seen in the homes of people whose ancestors are rich and big houses. This kind of blue and white happiness jar adds a festive and auspicious color to folk weddings